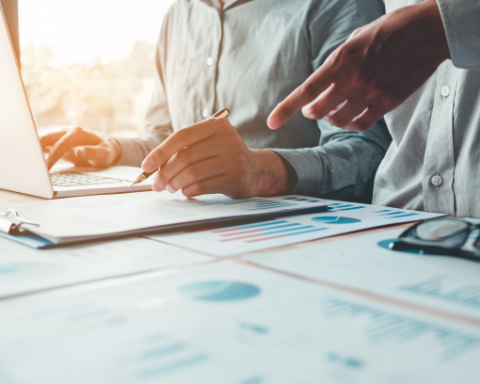 On Tuesday October 9, California’s major utility, Pacific Gas and Electric, implemented a preventative measure against wildfires leading to the shut down of power throughout the state. By Thursday morning, it was estimated that around 2.5 million people were without power. It was an historic event for California.

For many businesses affected by the power outage, the only option was to close for the duration of the shut off. No power meant no Internet. It was a stark reminder of just how dependent businesses are on technology. An outage like the one experienced this week in California, left many businesses vulnerable to a major interruption of daily operations. In other words, companies faced a potential loss of hundreds of thousands of dollars with the PG&E power outage. 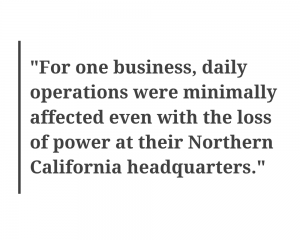 Yet, for one Northern California business, daily operations were minimally affected even with the loss of power at their Chico, Ca headquarters. With the deployment of their very own SatRunner™ CRD, Rescue 42 (a manufacturing company specializing in rescue equipment for Firefighters and First Responders) was able to continue client and internal communications via email and phone, and access to their cloud was never disrupted. Using their company laptops, employees tapped into Wi-Fi provided by the SatRunner™ CRD. And when customers’ calls came in to the office through their VoIP phones, employees had those calls forwarded to their cell phones via Wi-Fi calling.

On the first morning of the PG&E power outage, the team at Rescue 42 quickly wheeled out their SatRunner™ CRD from inside the building and deployed the unit. With a single ethernet connection to their router, the entire building was back to having an active IP connection. The SatRunner™ is capable of full SD-WAN management that prioritizes traffic from multiple sources. Generally starting with 4G LTE (SIM card and service plan dependent) in an emergency when traditional land method fails such as cable and fiber, and ultimate failsafe satellite service.  Employees at Rescue 42 were then able to gain access to their cloud services which for them included VoIP phone services, email, and cloud based team/project management.  If it had been needed, PoS and financial cloud services could have been accessed as well. 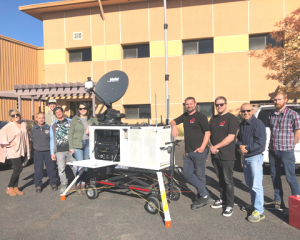 It is well known that most businesses fail to adequately plan for a disruptive event such as loss of Internet.  Even businesses having a BC/DR plan often don’t recognize the catastrophic impact associated with loss of Internet service. This doesn’t have to be you! With the SatRunner™, your business can continue day-to-day and displaced/remote operations despite a loss of Internet. Or you can simply take the Internet with you to support operations or customers wherever it’s needed!

Click HERE for a FREE price quote today!  For more information, visit our website at  www.ThePodRunner.com, email our National Sales Team at  info@thepodrunner.com, or call (888) 427-3728.