When it comes to Emergency Management, 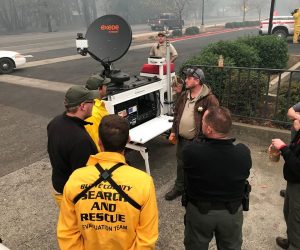 California’s wildfire season proved especially brutal in 2018 with the state’s most destructive fire on record. Butte County’s infamous Camp Fire tore through communities on that fateful morning of November 8, 2018. It was fast moving and fierce. Almost immediately, damage and loss of power and fiber optic cables to cell towers prevented residents as well as Emergency Responders from communicating. A recent article published both locally and nationally with the Enterprise-Record and Fire Rescue 1 highlighted the communications issues faced when the Camp Fire first broke out. Paradise Police Lieutenant Anthony Borgman was interviewed for the article, and his concerns about communication during the initial phases of response were heard.” At a certain point, I couldn’t maintain direct communication with CalFire,” said Borgman. “By the time it got to the point where I needed to request resources, the phones weren’t working.” * 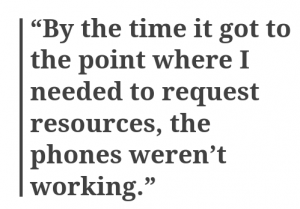 The Star-Runner CRD™ was initially set up at the Staging Area and was used to coordinate evacuations and firefighting operations. The most critical Internet, text and cell phone communication needs were during the initial phase of the fire, and the only resource available for this was the Butte County Sheriff’s COAM (Customer Owned And Maintained) Star-Runner CRD™. 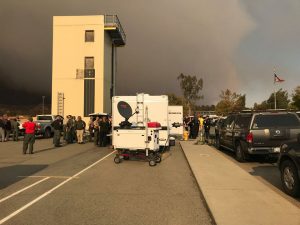 The Star-Runner CRD™ then deployed to Paradise/Magalia, where it was the only source of Internet, text and cell phone service (via Wi-Fi Calling) in the entire area. Wide area Verizon service was not restored to the area until Nov 21.

During the critical first hours, the Star-Runner CRD™ was the hub for evacuation and Search & Rescue operations. With the large number of agencies present, radio communications were extremely difficult. The Star-Runner CRD™ was the Incident Command Post (ICP) for a large group of Fire, Law Enforcement and Search & Rescue agency reps who were tasked as Tactical Dispatchers. At one point there were over 2200 emergency calls backed up. The Star-Runner CRD™ allowed the 911 dispatchers to e-mail spreadsheets listing the calls to the Tactical Dispatchers, where they were broken up by geographic sector and managed by the Tactical Dispatchers over their many tactical radio networks (TacNets). It would have been impossible to manage this volume of traffic by voice only over radio command frequencies.

The Star-Runner CRD™ also allowed Incident Commanders to handle their large volume of critical communications with their cell phones, texts and e-mail (including on their tablets and laptops) instead of trying to communicate by voice-only over the heavily impacted radio frequencies. The only place in the entire Paradise/Magalia area Incident Commanders could make phone calls and get texts and e-mail was at the Star-Runner

CRD™ until much later when the roads got cleared and outside agency satellite resources finally made it to the fire. During the deployment, the Star-Runner CRD™ typically delivered Viasat satellite Internet speeds of 20 Mbps down and 8 Mbps up. 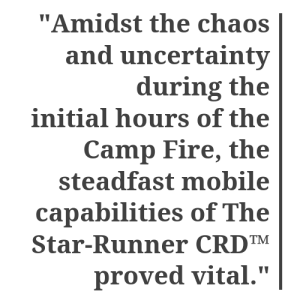 As the Camp Fire progressed, a Sheriff Deputy transported the Star-Runner CRD™ on the hitch of their SUV, through the rough, mountainous terrain and over downed trees and power poles. Because the Star-Runner CRD™ mounts on any Class 3 or above trailer hitch, it allows four-wheel-drive maneuverability, unlike other communication and satellite trailers.

Amidst the chaos and uncertainty during the initial hours of the Camp Fire, the steadfast mobile capabilities of The Star-Runner CRD™ proved vital. It created one of the only means of reliable communication between Departments during an unprecedented disaster.

In January 2019, just two months following The Camp Fire--having experienced the critical necessity of the Butte County Sheriff’s Star-Runner CRD™--CalFire/Butte County Fire utilized emergency funding to purchase their first Star-Runner CRD™. Now Fire Managers and Supervisors can use their cell phones and laptops anywhere, even on the most remote fires. CalFire/Butte County Fire can now bring Cellular and Data connectivity with them anywhere, anytime. 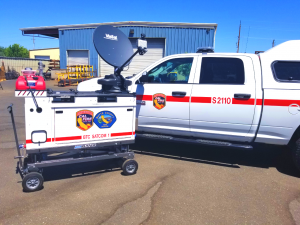 Reliable cellular and Internet communications is vital for Emergency Management. Cell phones (including FirstNet™) are no longer optional emergency communications tools. They are critical resources. Having the necessary communication equipment is the foundation of any successful emergency management plan.

Don’t let your Department be left in the dark!The Star-Runner CRD™ can quickly provide reliable cell and Internet service anywhere, helping your Emergency Management team be better prepared for this year's wildfire season. For a custom quote and more information, please email info@thepodrunner.com or call (530) 891-3473

View all posts by: PodRunner Team

Stay up to date with the latest and greatest!